Fractal Democracy enables a group of people to govern themselves without being captured by hidden, non-democratic, power structures. It does not make any ideological claims. Winston Churchill once said that “democracy is the worst form of government - except for all the others that have been tried”, but what if there are a multitude of ways to measure the will of the people, and some work while others fail miserably? Fractal Democracy is the best approach to tapping the wisdom of the crowds and reaching consensus on everything from leaders to budgets to laws.

How is Democracy Fractal?

The term “democracy” derives from its Greek origins in demos (all the people) and kratos (rule). A democracy is a system whereby all the people share power equally. Typically people think this means everyone gets an equal vote; however, voting by itself is a system known as Majoritarianism and represents the rule of the majority over the minority. Under a majoritarian system, the minority has no power, even if they vote, and therefore it would be inappropriate to classify it as a democracy.

In my book, “More Equal Animals - The Subtle Art of True Democracy”, I make the case that democracy requires the consent of the governed. This implies that the governed have the power to secede or leave the democracy.  Those that choose to remain consent to follow the group consensus even if they disagree. Without the individual power to leave, a system ceases to be a democracy and becomes the rule of the majority over the minority.

The power to leave entails more than just a right to leave, but also the ability to. If the members of a given democracy are co-dependent rather than independent then they couldn’t leave even if they had the right to. It is therefore critical for any democracy to support the independence of its members or it will devolve into an oligarchy (rule by the few) or tyranny.

Why Democracy must be Fractal

The requirement for members of a Democracy to have the right **and **ability to leave imposes limitations on the size and structure of a democratic system. For example, if all 8 billion people were part of a single “democratic” government, then, while each person may have a “right” to leave, they wouldn’t really have the ability to survive on their own.  However, if there were 1,000 countries and each person had a right to leave one country and join any other country that would have them then they gain the ability to leave.  Global democracy is, therefore, an impossible contradiction unless it is fractal in structure.

The independence, and therefore power, of an individual, is proportional to the number of countries they have the ability to join. If all 1000 countries block your immigration request, then you have lost your ability to participate freely and with consent in your current country. If there are no countries to which you would voluntarily consent to be a part, then your situation is similar to a single “global democracy”.  The more variety in countries available, the more equal everyone’s power to choose one that fits their needs becomes.

Therefore, each individual person would maximize their power and independence if they first organized at the most local level possible. A state could become a democracy of counties and the United States a democracy of States and the world a democracy of Countries.  With this structure, each person would have approximately 10,000 cities to choose from worldwide or 3000 counties to choose from in just the United States. Each of these cities and counties would have more power and autonomy which in turn means the people within those democracies have more total personal power and more equal power.

If democracy is not fractal in structure then the people will lack the ability to easily coordinate a secession and, therefore, their power to consent is compromised. The power gap between the individual and the group would be too great for any individual to hold the group accountable.

Voting is not Democracy

A typical misconception is that any society that gives the people the right to vote is a democracy; however, what if there are only two candidates on the ballot and they both share common positions which you find abhorrent? What if a dozen people control the media they only present certain candidates? What if political parties with non-democratic governance control which candidates you can vote for?

Voting is just a means to measure consensus; however, those who control the ballot and the media have the unequal power to present the people with a false choice when the people utilize traditional voting processes.

You can have a democracy without all of the people voting. For example, a truly random sampling of just 0.1% of the people could be used to measure the opinion of the majority. It is even theoretically possible that a Kingdom with a solitary ruler could be “democratic” provided that the people retained the ability to secede peacefully. This would be similar to the United Nations appointing the United States to be in charge of international law.  If any country did not approve of the rules being made by the United States then they would secede and simply ignore the rules. Then a new group of countries could form for the benefit of mutual collaboration.

**Democracy is the voluntary cooperation of people or organizations which have approximately equal power relative to each other and sufficient power to stand independent of the democratic organization. **Democracy has nothing to do with voting or the process by which a bill becomes law.

Typical voting processes have a pre-defined ballot which limits the choice of the people. Using fractal voting there is no need for a pre-defined ballot and all members of a fractal democracy have equal opportunity to be heard. This occurs by randomly grouping members into groups of 5 or 6. Each group must reach a consensus among its own members on who best represents their interests. The chosen representatives of each group are then randomly grouped and the process is repeated ƒractally (in a fractal manner). The end result is the integration of opinions of the entire population without any filtering by the media or political parties. A fractal voting system is what enables fractal democracies to truly empower the people while preventing the covert capture of power by the media, the political parties, or even the military.

Help bring fractal democracy to the world. Visit gofractally.com and join our community which utilizes fractal voting every weekend to reward those who make the most valued contributions to the cause. For more background on the principles behind fractal democracy check out my book, “More Equal Animals - The Subtle Art of True Democracy”. 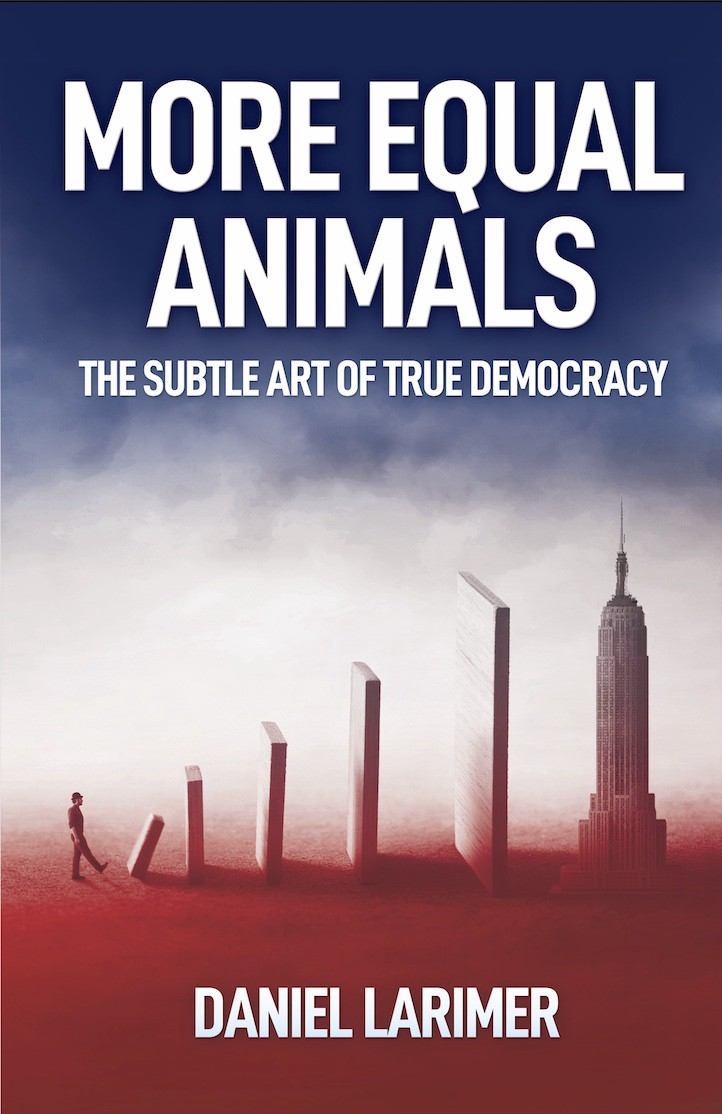